The days and weeks following the tragedy at Aurora, Colorado and Sandy Hook Elementary school have been rife with debate over just how the 2nd Amendment is meant to be read. While it is certainly easy to become caught up in the emotions surrounding such horrific tragedies, I implore you to take a moment to consider not only the history and reasoning behind the Framers’ drafting of the Amendment in question, but also consequences of an unarmed populous.

Before I go any further, consider the following: If you study the Constitution—the distilled result of months upon months of debate and discussion between the Federalists and Anti-Federalists—you’ll notice a common theme. It isn’t written to set parameters around the people. Rather, it is written to set parameters around the federal government—what it must do, and what it cannot do. With this in mind, let’s consider the 2nd Amendment, which reads as follows:

“A well regulated Militia, being necessary to the security of a free State, the right of the people to keep and bear Arms, shall not be infringed.”

That is, that the federal government cannot take away a citizen’s right to own a gun.

The common arguments as to the meaning of the 2nd amendment typically find themselves centered on the portion that discusses “militia,” or on hunting, which interestingly enough, isn’t even delineated therein.

First, we’ll assume that members of a “militia” are the only ones meant to own a gun. By definition, a militia is typically understood to be a civilian protection force. As Larry Schweikart and Michael Allen note in A Patriot’s History of the United States, “The Second Amendment addressed Whig fears of a professional standing army by guaranteeing the right of citizens to arm themselves and join militias. Over the years, the militia preface has become thoroughly (and often, deliberately) misinterpreted to imply that the framers intended citizens to be arms only in the context of an army under the authority of the state. In fact, militias were the exact opposite of a state-controlled army: the state militias taken together were expected to serve as a counterweight to the federal army, and the further implication was that citizens were to be as well armed as the government itself.” (A Patriot’s History of the United States, p. 126)

In other words, by its very definition a “militia” is an armed citizenry. While the Founders (after much debate over the Articles of Confederation—a pre-cursor to the Constitution which created a far weaker union or “confederation” of the several states) allowed the federal government to provide for the common defense in the form of a “formal” military, the Founders recognized the inherent tendency of mankind to usurp power as a rule and, with the penning of the 2nd Amendment, put a stop to the idea of the government disarming its citizens, regardless of the “good intentions” of such a move.

The Founders could have ended the amendment directly after Militia, wording it simply “A well regulated Militia, being necessary to the security of a free state, shall not be infringed. . . ” had their intent been to keep guns solely in the hands of a formal defense group. Instead, they went on to specify “the right of the people to keep and bear arms,” which assumes that each citizen is to be allowed to own a gun, and use it when needed.

It is also interesting to note that no limitations are placed upon the type of arms allowed. The Founders felt no need to do so, as a gun is a gun. “Armed” is armed;  it’s quite simple. If anything, this was left to the several states to discuss. Some have argued that since the high-powered weaponry that exists today didn’t exist at the time of the Founding, the 2nd amendment couldn’t possibly be construed to include those weapons. Antonin Scalia says it best in District of Columbia et al v. Heller:

“Some have made the argument, bordering on the frivolous, that only those arms in existence in the 18th century are protected by the Second Amendment. We do not interpret constitutional rights that way. Just as the First Amendment protects modern forms of communications … and the Fourth Amendment applies to modern forms of search …, the Second Amendment extends, prima facie, to all instruments that constitute bearable arms, even those that were not in existence at the time of the founding.” (United States Supreme Court, June 26th, 2008)

As mentioned, many also take “gun rights” to mean that private citizens are allowed to use arms to hunt and gather. If I may be so frank, consider for a moment the stupidity of such an assumption. In the days of the Founders, nearly everyone owned some kind of gun with which they hunted for the family. With the exception of some of the larger cities of the day where markets did exist, most lived in small villages or on plots of land wholly isolated from the convenience of markets. To insinuate that the 2nd amendment was framed to protect hunting rights would be similar to Congress today drafting an amendment which ensured that the rights of each citizen to go grocery shopping at Wal-Mart “shall not be infringed.” Naturally, the Founders had personal defense in mind.

Lastly, though many are somewhat squeamish to touch on this topic, it must be noted that the Founders had in mind not only the defense of one’s private person, family, and home (a practice which was already commonplace), but also the citizens’ defense against a tyrannical, oppressive government.  An armed, responsible citizenry would serve to help stand as a bulwark against such aggression:

“Before a standing army can rule, the people must be disarmed; as they are in almost every kingdom in Europe. The supreme power in America cannot enforce unjust laws by the sword; because the whole body of the people are armed, and constitute a force superior to any band of regular troops that can be, on any pretence, raised in the United States. A military force, at the command of Congress, can execute no laws, but such as the people perceive to be just and constitutional; for they will possess the power, and jealousy will instantly inspire the inclination, to resist the execution of a law which appears to them unjust and oppressive.”
—Noah Webster, An Examination of the Leading Principles of the Federal Constitution (Philadelphia 1787).

An unarmed citizenry, no matter how innocent and “well-intended” such sweeping restrictions on gun ownership are, simply makes it easier for governments down the road to do as they please with it. As George Mason once noted in the Virginia Convention:

“Forty years ago, when the resolution of enslaving America was formed in Great Britain, the British Parliament was advised by an artful man, who was governor of Pennsylvania, to disarm the people; that it was the best and most effectual way to enslave them; but that they should not do it openly, but weaken them, and let them sink gradually, by totally disusing and neglecting the militia.”

Gun ownership as prescribed in the Constitution isn’t to be construed as a carte blanche to use guns in any way an individual sees fit, but rather solely for protection of one’s person. As John Adams put it:

“To suppose arms in the hands of citizens, to be used at individual discretion, except in private self-defense, or by partial orders of towns, countries or districts of a state, is to demolish every constitution, and lay the laws prostrate, so that liberty can be enjoyed by no man; it is a dissolution of the government.”
—John Adams, A Defence of the Constitutions of the United States, 475 (1787-1788)

In other words, YES- there should be laws surrounding gun usage. For these reasons we have laws that delineate self-defense; laws that delineate the process through which guns may be lawfully attained; etc. The difference between regulating gun usage and gun ownership is vast. One prescribes the allowable actions of such ownership–primarily, self-defense; the other seeks to partially or entirely prohibit the ownership of some or all guns.

Interestingly, modern day studies continue to prove again and again the results of disarming a population. In an ironic twist, the cities, states, and nations with the strictest gun laws also tend to be the home of the highest rates of violent crime. Consider the crime rates of certain European countries as compared to gun laws/gun ownership in this study by Harvard University: 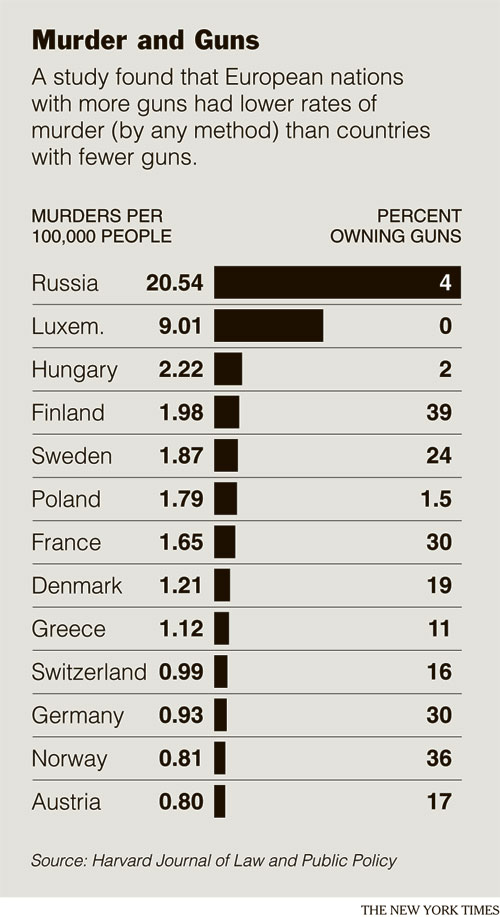 As Peter Tucci of the Daily Caller notes,  “But in general, gun control doesn’t make people safer. What it does do is needlessly send people to jail and rob law-abiding citizens of the dignity and peace of mind that gun ownership provides.”

Precisely. Folks, as sad as it is, evil exists in this world. The Founders recognized this, and ensured the right to protect oneself by putting this idea into words. I’m not sure that the Founders had any particular order in crafting the Bill of Rights, but is it not interesting to note that directly after the incredibly important right to speak one’s mind, comes one’s right to protect oneself against those who would them bodily harm? The original Bill of Rights certainly displays an intriguing trajectory beginning with rights associated with one’s mind; then one’s person; then one’s possessions; then one’s freedom as it pertains to warrants and trials. . . but I’ve digressed. The point is that the Founders found it so vital to the preservation of liberty that they placed this section at the very beginning, and minced no words about it. “. .  .the right of the people to keep and bear Arms, shall not be infringed.”

Shall not be infringed.

4 thoughts on “The 2nd Amendment Explained”