“Our country’s like a car broken down at the side of the road. You open up the hood and see that all the hoses and wires have been slashed. You don’t know why; you don’t know how. . . all you know is they are inoperable. So, you simply change drivers, hoping that this will fix the problem. The same goes for our contry. Today, we need mechanics, not new drivers.” [paraphrased] -KrisAnne Hall

If we’re ever to get out of the mired, tangled, dirty mess stewing in Washington, we need someone who understands the inner workings of our nation’s foundation–“a mechanic,” as opposed to yet another face placed at the helm of a broken down heap.

To be sure, our nation isn’t a broken down heap. Remember, a wonderful car won’t move an inch if its inner workings have been slashed; if the lifeblood it needs to survive can’t reach the motor. Such is the state of affairs in our country. For years, certain factions within our nation have attempted to cleverly dismantle, shove aside, or shred entirely the Constitution; the very building blocks that unleashed the freest nation on earth.

The arguments are legion. “It isn’t relevant because it was written by old white men,” or  “It was written by slave owners, therefore it must be flawed,” or my personal favorite, “How could men who lived 250 years ago possibly understand the intricacies of today’s modern society?”

KrisAnne Hall, a former assistant state attorney (FL), was fired for teaching the Constitution and its rich history to Tea Party groups on her own time. Her then-employer gave her a ultimatum- either quit teaching to Tea Party groups (which were “racist,” in the eyes of her employer), or you’re fired. In a bold move many would find hard to do, she chose the latter. Today, after having won her federal lawsuit against her employer, she goes around the country, teaching for hours on end. . . for free.

This past Saturday, the North Metro Tea Party Patriots led by Jack Rogers, and flanked by local conservative talk show hosts Benjamin Kruse and Jack Tomczak of The Late Debate, were honored to host Ms. Hall at Blaine High School for one of her famed five-hour Constitutional seminars. The five hours flew, as she systematically dismantled the arguments so often propagated by the American Left, and brilliantly portrayed the Constitution’s vibrant thousand-year (yes, thousand-year!) history without so much as a teleprompter in sight. A few glances at a note card; a quick peek at a binder and her smartphone. . . these were all the prompts she needed as she seamlessly spoke her way through a history most have never been taught. 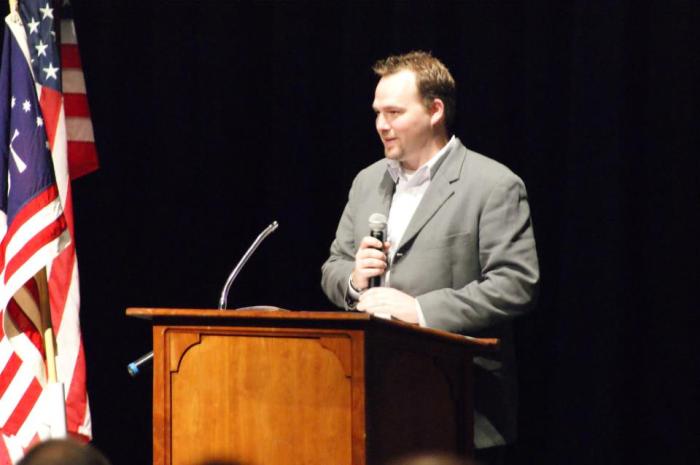 Jack and Ben of The Late Debate 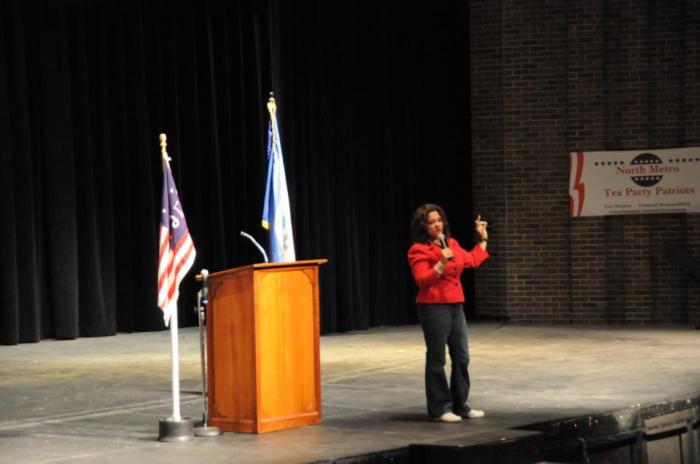 (All photos courtesy of the North Metro Tea Party Patriots)

Would it surprise you to discover that hardly a concept in the Bill of Rights was “new”?  Would it surprise you to discover that the problems the Founders faced and addressed with the Constitution were scarcely novelties? And, as Ms. Hall points out, liberty was not invented in their generation-they simply learned from their history and avoided its mistakes, while gleaning from its highest points. Our Constitution has an “English Family Tree” nourished by the understanding Natural Law, and the precepts of a Judeo-Christian world-view, and it was this genius set into motion in the form of a document by a few providential men, that unlocked a free nation unlike any other.

While many excellent points were made (as she does in fact pack approximately four years of collegiate level study of the Constitution and its history into just five hours), the overriding theme was simple- our Constitution is NOT a living document, and was not “created on a whim.”

Beginning in 1066 just before William I, she traces the Constitution’s genealogy all the way through to George III, whereupon the Founders we all know and admire come on to the scene.

She traces the concept of participatory government, due process, taxation without representation, Congressional (Parliamentary) authority to draft law, religious liberty, freedom of speech, and many other concepts that emerged from the struggles and difficulties of generations past. From England in 1066 to King John and the Magna Carta; from King Charles and the Petition of Rights in 1628 to King James II and the Glorious Revolution of 1689–each fight for liberty studiously observed by our Founders, and from which such important concepts as the aforementioned are gleaned.

She teaches that if the document had no heritage; no foundation in past victories- then we can certainly assume that a document which emerged simply from the imaginations of a few 18th century men could very well indeed be a fundamentally flawed document. This isn’t, however, the case.

This isn’t to say that the Founders weren’t an exceptional group of men. Ms. Hall notes that a fairly small percentage of the colonists actively stepped forward to participate in this revolution, and of these those who openly signed their name to the Declaration of Independence were even fewer. Thus it was indeed providential that the group of men were able to get together and agree upon precisely which portions of English history to focus. They were also, contrary to what modern day history books tell you, God-fearing men. It was this understanding of the hand of God in the rights of mankind coupled with the Founders’ expansive knowledge of their own heritage’s successes and failures that produced the wildly successful document we know as the U.S. Constitution. Ms. Hall reminded the crowd of Benjamin Franklin’s sage words:

“In this situation of this Assembly, groping as it were in the dark to find political truth, and scarce able to distinguish it when presented to us, how has it happened, Sir, that we have not hitherto once thought of humbly applying to the Father of lights to illuminate our understandings? In the beginning of the Contest with G. Britain, when we were sensible of danger we had daily prayer in this room for the divine protection.- Our prayers, Sir, were heard, & they were graciously answered. All of us who were engaged in the struggle must have observed frequent instances of a superintending providence in our favor. I have lived, Sir, a long time, and the longer I live, the more convincing proofs I see of this truth- that God Governs in the affairs of men. And if a sparrow cannot fall to the ground without his notice, is it probable that an empire can rise without his aid?” (July 28th, 1787)

Just imagine for a moment, that the same argument that plagues our nation today plagued it in 1787. Today it is often said that the Constitution can’t possibly be relevant because it’s nearly 250 years old. That is tantamount to those in the Founders’ day rejecting the ideas the Founders included because they were “700 years old.”

Liberty wasn’t invented in the generation of the Founders. Nor was it invented in the days of William I in 1066 or Charles I in 1628, for mankind does not “invent” liberty. Our rights to life, liberty, and the pursuit of happiness are bestowed upon us by our Creator, not a king; not a president. Liberty does, however, require that mankind constantly guard it from such evil and oppressive leadership. As Thomas Jefferson once said, “the price of liberty is eternal vigilance.”

We don’t need new ideas. We need a mechanic who can effectively put back into motion the ones we already have.

To learn more about the genealogy of our Constitution from start to finish, please visit KrisAnne Hall’s website at www.krisannehall.com where you can access her books, and DVD sets of her presentations.

19 thoughts on “KrisAnne Hall: The Genealogy of the Constitution”