“The focus of ‘Last Moments,’ in part, is to help those going through this process to know they’re not alone, and that their grief should not be overlooked, nor minimized by others.”

That’s a line from a Buzzfeed article highlighting the work of Ross Taylor, a photojournalist who has captured the moments of pet owners and their beloved pets as they go through something called at-home pet euthanasia, which is “part of an emerging trend to receive end-of-life care in the home, instead of at a clinic.”

The pictures are heart-wrenching. A woman cries out inconsolably as her husband is similarly overcome with grief.  Another owner’s face is scrunched up in an agonizing sob as she cradles her dog’s head while it died.

I’ve been through it myself, and I’ll never forget it. But that’s another story for another day.

So here’s the thing: to be perfectly honest, I wasn’t going to write this article.

I didn’t think that another voice adding to the fray would be of any help. But no sooner did those thoughts go through my mind, when another one popped right in: speak for them. Speak for those whose cries we can’t hear; for whose deaths are far more painful and torturous than the peaceful sleep we subject our animals to at the end of their lives. Speak for those who never even had a chance to fight back.

I thought of the anguish across every single person’s face in that Buzzfeed piece.

And then I thought of the cheers.

When the New York legislature passed a law protecting late-term abortion (up to birth) this week, the gallery of the New York State Senate erupted in literal cheers. Governor Cuomo directed that One World Trade Center (the building erected on the very spot so many people were killed on 9/11; how ironic) be lighted in pink to celebrate the passage. People all over the country celebrated.

People cheered at the idea that a woman could carry a child all the way up to the due date and still decide to, as many written explanations of abortion delicately put it, “ensure fetal demise.” 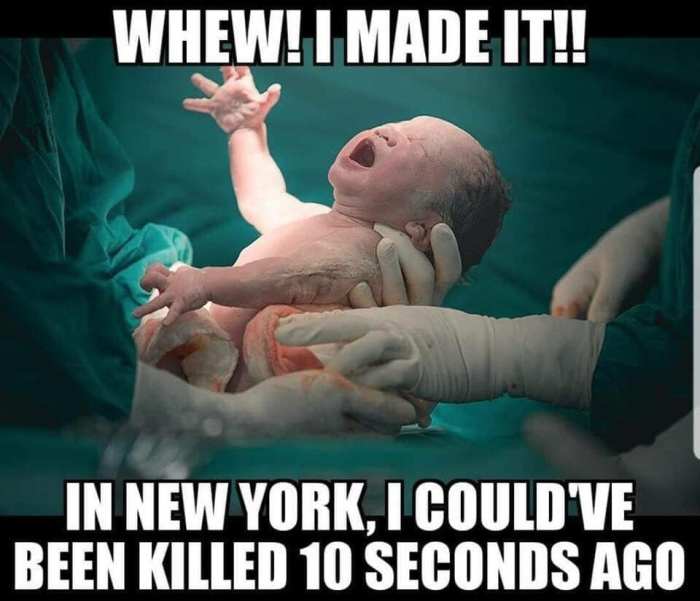 The argument is (for this particular bill anyway) that it’s only to save a mother’s life, or due to viability of the baby. It is literally not medical necessary to perform an abortion late term. In fact, an abortion actually takes LONGER than an emergency C-Section. Late term abortions (such as induction abortion, and dilation & extraction abortion),  take days to complete from start to finish.

On the other hand, emergency C-sections take 30 minutes from decision to delivery, and a doctor can get a baby out within a minute of making the first cut.

Minutes, versus days. You tell me: which is in the interest of the health of the mother? 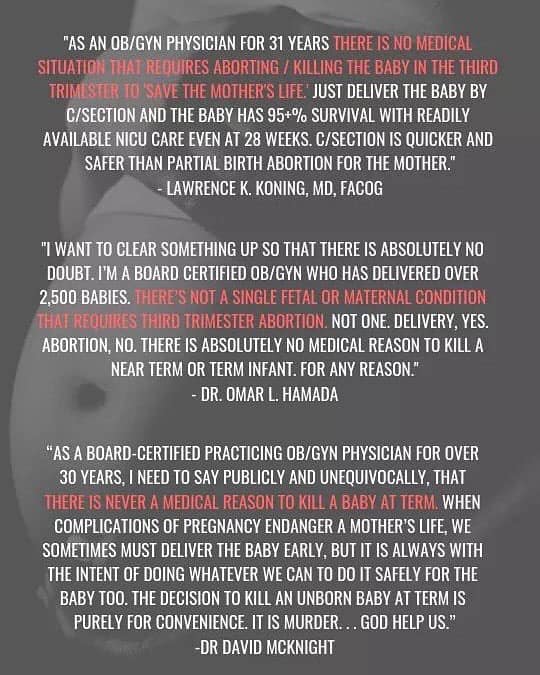 I want to put a few things in perspective for you, if I may.

How do we define “murder”?

Why is Danny Heinrich, the man who sexually assaulted and killed then 11 year old Jacob Wetterling in rural Minnesota, considered a murderer?

Why is Joaquin “El Chapo” Guzman, the notoriously violent drug kingpin currently on trial in New York (once again, how ironic), considered a murderer?

Why did Kermet Gosnell, a doctor who “routinely delivered babies alive and then cut their necks with scissors,” receive a sentence of life without parole plus 30 years—and is, in fact, considered “America’s biggest serial killer”?

Why was Ed Gein, the literal inspiration behind movies like “The Texas Chain Saw Massacre,” considered a murderer?

You get the picture.

Seriously though, how do we qualify the term? And why doesn’t it count when it’s a child that hasn’t yet been born?

While we’re at it—what makes a person, a person? We’re all adults here; we all took basic biology. We all know deep down that nothing magical happens in the birth canal to convert a fetus into a human. So what it really comes down to is this:

Do you (as this piece aptly points out) believe in equal rights for all? Do you believe that every human has at LEAST the same value as a beloved pet, like I talked about above?

What defines a human death that we’re supposed to “care” about?

The obvious next question then becomes: why do we protect life for anyone? Why send the Danny Heinrichs and the Ed Geins and the Kermet Gosnells of the world to jail at ALL? Seriously, where’s the line?

If we cheer abortion, and cheer the sentencing of the heinous murderers I referenced earlier, we’re saying that not all human life is equal.

If we cheer abortion, and in the same breath decry racism, we’re saying that not all human life is equal.

If we cheer abortion, and mourn the loss of a child killed by gang violence in the streets of Chicago, we’re saying not all human life is equal.

If we cheer abortion, and yet mourn the loss of this poor child who killed himself after being bullied, we’re saying not all human life is equal.

You see the slippery slope this begins to turn into.

I’ll leave you, yet again, with this final thought: is every human life equal?