Associated Global Media reported today that mobs of Jews stormed German Chancellor Angela Merkel’s residence last night, exacting revenge for the Holocaust. Similar protests and actions instigated by the world’s Jewish population are planned for scores of other European countries, as well as Palestine and Saudi Arabia in retribution for the millennia of abuse suffered by their people. In other news, a spokesperson for the Cherokee nation confirmed that retribution for the Indian Removal Act of 1831—a Congressional stunt that displaced millions of Native Americans from their homes in the Southeastern United States—is long overdue, and that similar protests are planned.

These sentiments have spread like wildfire, as representatives and spokespeople for the descendants of early Irish-American immigrants, the South Vietnamese, the Kurds, the Aborigines, the Mende of Africa, and scores of other once-oppressed or currently oppressed people confirm plans for a reprisal that’s a long time coming.  “Eye for an eye!” has become the globally unifying chant for all those once oppressed at some point in our world’s long history.

While some have labeled these protests as racially charged, African American professor and MSNBC contributor Michael Eric Dyson shows the world why this simply cannot be. “Racism presupposes the ability to control a significant segment of the population economically, politically and socially, by imposing law, covenant and restriction on their lives. Black people ain’t had no capacity to do that. Can we be bigoted? Yes. Can we be prejudiced? Yes. Racist? NO.”

In the above paragraphs, there are 2 falsehoods, and 1 truth. Care to venture a guess?

Falsehood 2: There are no Jewish, Irish, Vietnamese, Kurdish, Aboriginal, or Mende-incited protests around the world.

Truth: Michael Eric Dyson is absolutely serious . . . and that was a direct quote.

In an effort to end what he calls “black self-hatred,” or the frustrating condition when an African American might begin to feel that he or she might have done something or said something that society might view as  “racist,” or begin feel a certain feelings  of guilt about, say, tweeting that: 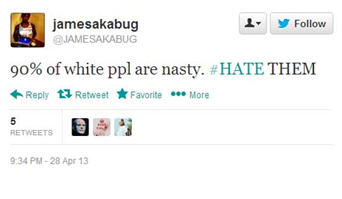 … Dyson tells us that the African American struggling with feelings of guilt over potentially “racist’ behavior should feel secure in the knowledge that his place in a social minority would excuse him (or her) from any guilt. These tweets might not be “nice” thoughts, but they are—as Dyson shows us—certainly not racist. The author of these Tweets—James Edwards—probably crossed the line when he turned his words into actions—specifically, when he helped knock out (shot dead in the back) a white (note: not a white Hispanic) Australian man as he jogged—but Edwards really can’t be blamed. It’s as if the oppressive and intolerant society in which he was raised pulled the trigger for him and his friends. Like a knee moves when a doctor taps it, Edwards reacted to his society. Who can blame him?

Dyson goes on, saying that certain actions that might tend in the direction of prejudice or bigotry cannot and must not be compared to the racism of white, or white Hispanic people. In fact, drawing comparisons between the two is just plain wrong, or as he puts it, both “specious” and “spurious.”

Dyson ends the podcast with an expression of his frustration with the “incredibly cantankerous viewpoints that don’t honor the integrity, the beauty, the diversity, the complexity, and the wondrous, rapturous intelligence of black people.” He concludes, “ that’s why I hang with black folk all the time, ‘cuz I know better than that. Ya heard?”

An unidentified African American woman holding a Justice for Trayvon Martin sign echoed Dyson’s conclusions, stating that she was “so sick of hearing that black people are racist. We can’t be racist. We don’t own a militaries or banks, we don’t hold the jobs, we can’t oppress a race of people. We cannot influence the media to think a certain way about a race of people. We could never be racist. We are justified in our anger, for our treatment for hundreds, thousands of years. I am not a racist. But I am certainly angry about the treatment of my brown people. JUSTICE for Trayvon.”

Here’s the deal, everyone. All races have at one time been victims of oppression. The pages of history are positively bursting of sad examples to this end. Using Dyson’s explanation, since a person cannot be racist if that person is part of “the oppressed” . . . then by definition racist feet have never once set foot on this planet.

One thought on “Justification: Part 1”