(12 Reasons Barack Obama is One of the Greatest Presidents Ever, by Matthew Lynch)

“He is for one race -the human race. In just a few short years, Obama’s professional achievements and continued demonstration of equality and integrity have done wonders for race relations. America has never been more unified as a people than it has been under the direct leadership of Barack Obama. Finally, the racial lines that have divided blacks and whites for decades seem to be narrowing.” -Matthew Lynch

America has never been more unified as a people? From Democrat run radio ads (exclusively in Spanish) about how the GOP wanted to deport ALL Mexicans to the vitriolic hate-spewing towards non-blacks after the Trayvon Martin trial (including a Department of Justice push for protests during the Zimmerman trial); from NBC’s doctoring of the Zimmerman 911 tapes to spark race debates to Jeremiah Wright’s (the president’s former pastor) heinous race remarks, racial division is alive and well in this country . . . but not in the way that Mr. Lynch and his ilk assume. Racism like the kind Jesse Jackson and Al Sharpton like to pretend is still the societal norm in this country is certainly still around, yes . . . but I’m talking about reverse racism. The “we’re going to stick it to you, whitey, for the sins of your ancestors . . .you were BORN racist . . . it’s in your blood” kind of racism: 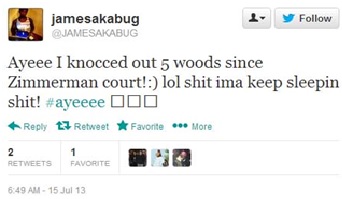 A “Wood,” in case you’re unaware, is one of many derogatory terms for “white person” . . . and “jameskakabug” (James Edwards) was one of three teens who fatally shot—for fun—an Australian student Chris Lane as he jogged in Oklahoma. Curiously, the same president who inserted himself into the Trayvon Martin fray remained silent for this one; Jesse Jackson’s lackluster tweet stated that such actions are to be simply “frowned upon,” and Rev. Al Shartpon noted that there “nothing to protest,” because it wasn’t “racial.” Nope–knocking out some “woods” in retaliation to the Zimmerman verdict is standard practice.

As the Daily Caller puts it,

By inserting himself in situations like those mentioned above (see: Henry Louis Gates Jr. and Trayvon Martin) instead of calling for sanity in the country, and staying silent in the face of those who practice the kind of reverse racism I just noted, President Obama only tears open a healing wound this country has long since tried to mend.

Let’s face it. Racism still exists in all its forms and it probably always will. Indeed, racism is a sad part of humanity that must be daily confronted. America needs a leader that unites, not someone who stays silent in the face of those who wish to keep dredging up the horrors of racism our country has witnessed by constantly marrying them to today’s crimes and today’s situations.