As is the case most mornings, we had the morning news on in the background as we got ready for work and daycare. At one point, Lawrence Jones came on the screen with the rest of the Fox & Friends crew. Observing that he looked a little different than Steve, Brian, and Ainsley (i.e. he’s black, they’re not), my daughter thought for a second and called out, “Mommy look! That guy looks like chocolate!”

I couldn’t help but laugh a bit. It’s not like it’s the first time she’s seen someone of a different color; she attends preschool with children of virtually every background.

She just so happened to be going through a phase where she began equating things (you know, “if this, then that” type stuff). For example, she’d recently learned that blue and red make purple—and made sure to tell us every time she saw those two colors anywhere near each other.

This continued on through these last few months. “Mommy! That guy looks like a dinosaur!” she shouted, in Target, in very close proximity to the man with the green Mohawk.

You get my drift.

She’s learning about the world around her in the best way she can, and to the extent that her little still-developing mind can grasp. She doesn’t understand pigmentation or race or ethnicity (she’s just barely grasping the fact that “Babu’s language”—what her grandmother speaks—is in fact Spanish).

What she does understand are simple things. Chocolate is brown. That guy looks brown. Maybe that guy is made of chocolate.

I thought about her little observations this week as I watched social media blow up over the fact that the president’s daughter, Ivanka Trump, posted that she and her family had adopted a new dog. “Meet Winter, Arabella’s birthday dream come true and the newest member of the Kushner family!” she gushed, next to a sweet picture of the pup. 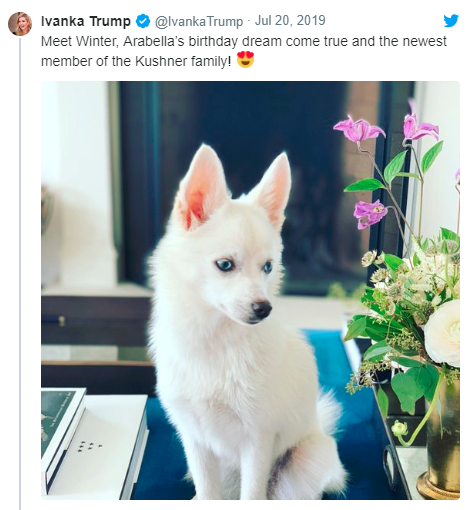 Pretty benign, or at least I thought. Enter the hoards:

This, ladies and gentlemen, is why we can’t have nice things.

For the record, I remember being at the doctor’s office five years ago or so, and flipping through a fashion magazine whose cover and thus feature story was none other than Ivanka Trump herself, being praised for juggling career, kids and her own health and wellness, all while looking stunningly put together. But I guess when your father wins the presidency over the likes of Hillary Clinton, you become the racist devil incarnate. Oh, wait—pardon me. That’s your father. You’re the racist devil’s minion incarnate.

Let’s play along, and say that Donald J. Trump is, in fact, a festering pile of racism—just for a second.

This is where we’re at as a society? That a photo of…of a DOG…a little girl’s dog… can go viral because its fur is WHITE? Because its eyes are BLUE? That a family’s choice of dog is indicative of their racial preferences?

The Left has weaponized race, as my good friend Chris Salcedo so rightly put it.

Don’t like the politics of a politician (think: Obama, Omar, Ocasio-Cortez, Tlaib, et al) who happens to be a minority? RACIST!

You believe in the rule of law when it comes to our immigration system? RACIST! (And you’re using “rule of law” to hide your racism.)

Do you support calling out the horrors of MS-13 gang activity? RACIST!

Do you support police? RACIST!

Are you a Republican, Conservative, or anything other than hard Left? RACIST!

I mean, we’ve almost reached Salem Witch Trial days, where anyone for any reason could be simply accused of witchcraft—and baddabing, baddaboom, the person got a one-way ticket to the nearest rope and tree. End of discussion.

This use of “racism” is dangerous for three critical reasons:

Think about it: what is this insanity teaching my little girl about me? I have blue eyes just like that dog. I’m not tan like daddy or the rest of her family in Mexico; I’m not black like the man on TV she once equated with a Hershey’s bar. It makes me sad to think about what my daughter might ask if she knew what was going on with the Ivanka Trump dog situation.

“Why are people mad, Mommy?”

“Well, because she got a dog with white fur and blue eyes.”

“Why are they made about that, Mommy?”

“Well, because they think it means she doesn’t like people who don’t have blue eyes and white skin.”

“Mommy, you have blue eyes and white skin.”

~thinks about it some more~

“I have brown eyes, Mommy.”

~thinks about it even more~

It might seem that I’m being dramatic. But that’s my daughter for you—her keen eye and critically-thinking mind are wise beyond her years. If I let her see what people were saying about this dog and its owners, that is precisely—and I mean precisely—the conversation that would take place. Mark my words.

Is that what we want? For everything to be boiled down to race? It’s not what I want for my kids. And I’ll be working my hardest to make sure it’s not.